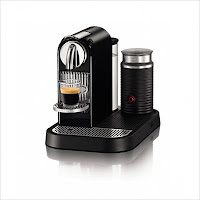 I think I'm addicted to coffee.

I can't remember exactly why, but when my husband and I got married and moved into THE TINIEST little flat in Islington (because, yes, we are that swanky), my mommy got us a Nespresso machine. I do remember that one of the reasons for this gift was so that, whenever she came to visit, she would always have good coffee available. But more than that, I would argue to say that Nespresso is not only good coffee, but the best. Why is it the best? Because it's
tasty and it's easy. Duh!

Call me lazy but if all I have to do to make a latte is fill up the frother with my soya milk, put a Nespresso pod in the machine and press two buttons (on on the frother and one to brew the Nespresso), I'm pretty much won over. Easy peasy! But as easy as it is, if the coffee wasn't amazing it wouldn't have the same effect. But let me tell you something: the coffee is AMAZING! How amazing? Well, in all honesty, someone just tries the espresso and they're won over. My friend Chris did just that. He tried it at my place then he went out and bought one for himself. I really didn't have to do anything.

But... does normal coffee make anyone else feel ill? I'm definitely one of those people. I can't drink coffee wherever I want. I'd be paying for it the rest of the day with a horribly upset stomach if I tried. Strangely, this is not the case with the Nespresso coffee. I don't know why, but it isn't painful! Magic? Maybe.

Now, back to the 'I think I'm addicted to coffee' comment. I have a banging headache. At the beginning of the week, I looked in my Nespresso pod basket and was then horror struck. My heart sank, probably a very similar feeling to hearing the words 'We need to talk'. I only had 3 caffeinated and 2 decaffeinated (which are as good as useless in the mornings) pods left. Then my husband said that maybe we shouldn't get more pods just yet. Despite this obviously insane suggestion, I have not ordered any more pods AND (being the generous wife that I am) I let him have the last three caffeinated ones. I'm not sure what happened to one of the decafs but now there's only one pod left. With no Nespresso, how am I going to rid myself of this pain that feels like someone's drilling from the base of my skull and through my left eye!? Painkillers? What you think I've not tried that!? Silly people don't understand what true coffee-less pain is! Tea? What you think I've not tried that either!? Stupid tea, like trying to grow wheat in the desert, it just doesn't work. Go to a coffee shop? The nearest one is The Front Room on Tollington Road, no thanks I'd rather be run over by a bus. In fact, that's what I felt like after drinking their coffee. Disgusting.

Am I complaining? Going nutso? Maybe it's the Nespresso-less delirium that's setting in.
Posted by Joanna Farrow at 12:58